On May 18, 2013, Stege Sanitary District held a 100 year celebration and open house.  Thank you everyone for the overwhelming support.  A good time was had by the District staff, colleagues and ofcourse, our customers.

Where the Sewage Meets the Sea, a comprehensive history of the Stege Sanitary District is now available free for download. The 116-page book was written by David Weinstein, longtime El Cerrito author and journalist. David’s other books include “It Came from Berkeley: How Berkeley Changed the World,” “Signature Architects of the San Francisco Bay Area,” and the text for “Berkeley Rocks: Building With Nature.”

A Capsule history of the Stege Sanitary District

Stege Sanitary District, which incorporated in 1913, four years before the city of El Cerrito, is one of the oldest special districts in the Bay Area.

The district got its start when a handful of residents, realizing that the largely undeveloped area just north of the Alameda-Contra Costa county line would remain undeveloped unless there were sewers, campaigned to get some.

Led by William Huber, the justice of the peace, the group proposed creating a special district to fund and build sewers. They brought the matter bfore the 285 voters who lived in Rust, Stege and nearby unincorporated communities and in May 1913, on a vote of 205 to eight, Stege Sanitary District was formed and its five original directors, including Huber, elected.

The district, about 3,000 acres at its founding, covered what today is El Cerrito, Kensington and part of the Richmond Annex.

In September, Stege came to the voters again, seeking approval of a $75,000 bond issue to pay for sewers. That too easily passed.

Stege began buildings sewers in 1914. Like all sewers at the time, they dumped directly into the bay without treatment.

Stege’s history over the next several decades was one of accommodating residential development, which boomed in most parts of the district. Often, Stege couldn’t get its pipes in fast enough for home builders.

Stege enforced sanitary rules, requiring residents of the rural area to connect to sewer pipes, rather than dispose of their wastes in septic tanks. Stege enforced rules against off-leash dogs, unsanitary barns, and garbage dumping.

Before El Cerrito incorporated in 1917, Stege even handed out liquor licenses in town.

Throughout its history, Stege was very much a part of the community. Its board members also served on the El Cerrito city council and on advisory bodies in Kensington and the Annex. They worked in the local gambling halls and the dog racing track, sold real estate, ran local businesses, and worked for Standard Oil in Richmond. Many were community leaders.

Under the guiding hand of Alfred G. Baxter, a board member from 1938 and general manager from 1957 to 1984, Stege expanded its system many times as growth continued, laying wider mains and more of them, moving its outfall pipes further into the bay as pollution started to become a problem.

By the start of the Second World War it became apparent to engineers, water officials and the general public that dumping raw sewage couldn’t continue much longer. People called the bay “the Big Stench.”

In 1946, already needing major improvements to its system to handle the more than 10,000 newcomers who had arrived during the war, Stege was faced with another daunting task. State public health officials banned dumping raw sewage into the Bay.

Stege tried to band together with neighboring sewer agencies and to tie in to a plant near the Bay Bridge being built by the East Bay Municipal Utility District, but was unable to reach agreement with EBMUD.

So Stege bought land on Point Isabel and built its own sewage plant that opened in 1955 – “paid in full,” the district bragged. Stege continued to improve its system through the 1960s. But as that decade reached its end, and as environmental awareness rose, it became clear that Stege would need to upgrade its level of treatment to “secondary” levels.

This time, Stege did reach a deal with EBMUD. Stege began sending its sewage through EBMUD’s Bay Bridge plant in 1972; the old Stege plant was now used during wet weather only, to handle overflows caused by storm water flooding the sewage lines.

In 1976 a new board member proposed dissolving the district entirely, arguing that it was unnecessary. Directors agreed to cede control of district sewers to El Cerrito, after Richmond agreed to handle sewers in the Annex.

But residents of Kensington objected, arguing that El Cerrito would ignore their concerns. They blocked Stege’ proposed dissolution in a 1979 vote.

For four years, Stege contracted with the West Contra Costa Sanitary District for sewer maintenance and other services, after laying off most of its staff. That arrangement ended in 1984, in a dispute about costs – just in time for Stege to take on one of the biggest challenges in its history.

Water quality rules required sewer districts to reduce “infiltration and inflow” of rainwater into their lines to reduce pollution during wet weather. Stege, under engineer and manager Larry Rugaard, became a leader in the effort, with an innovative strategy of replacing all mains and private laterals in the area with the greatest problems.

Over the next decades, under Rugaard and then managers Doug Humphrey and Rex Delizo, Stege has pioneered techniques for preventive maintenance, winning many industry awards.

Stege, which prides itself on fast response times and customer service (callers always get a real person), celebrates its 100th anniversary in 2013. 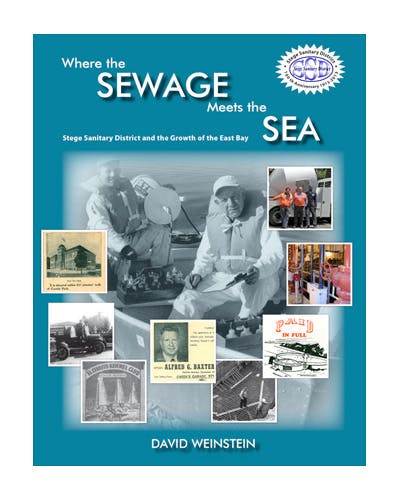 Stege Sanitary District is proud to share its diverse and sometimes unexpected history with our customers and with anyone with enough curiosity to step back in time.

Stege Sanitary District is proud to share its diverse and sometimes unexpected history with our customers and with anyone with enough curiosity to step back in time.